Please help us and read our weapons safety concept

If you want to come to the FaRK and your costume/outfit contains a weapon or a similar item, we urge you to read the information listed here carefully. Don’t worry, there are plenty of options for your outfit!

Please support us, and also yourself, according to the motto: Make FaRK not War!

Examples of weapons which are allowed and not allowed (Red, yellow, green) 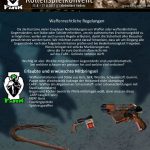 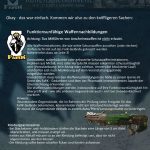 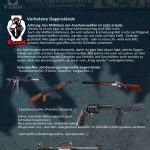 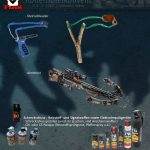 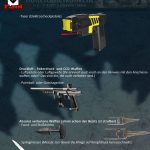 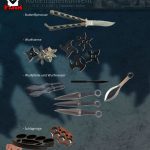 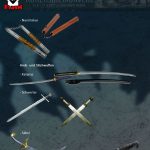 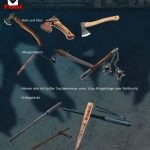 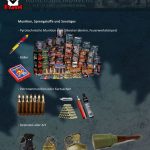 Even before the FaRK 2017, we sat together to get to know the gun regulations as part of the security concept of the event. We would like to inform you in advance of the basic considerations, so that you can plan and already now estimate which items can be brought to the site without any problems and which ones cannot.

We are aware that, as with everything else, there are different views and points of view on the subject of gun legislation. However, decisions in principle must also be taken by the responsible body. That has happened.

Although the rules are, of course, based on the current Arms Act, we largely refrain from legal classification and subsumption of items under the relevant standards. Rather, the following rough classification should serve as orientation for you. Just as it happend at the last FaRK, we have three ypes of objects; red, yellow and green:

Red objects are those which, in principle and without exception, may not be brought onto the premises. Those who try anyway will be expelled from the site. For us, it does not matter whether the owners hold a valid firearms license or not. Officials on duty are, of course, exempt.

The “red” category includes in particular sharp firearms and equivalent objects, firearms, irritants or signal weapons, electro-pulse devices, compressed air, spring pressure and Co2 weapons, slash and stab weapons (whether they have sharp, pointed or blunt blades) and “prohibited weapons”. Visitors are prohibited from carrying sham weapons within the meaning of the Weapons Act (Section 42a WaffG).
Ammunition and explosives of all kinds, for example in the sense of pyrotechnic ammunition or fireworks, are also found in this category.

The same applies to everyday, work or sports items which, according to common sense, have nothing to do with visitors to such an event. We are talking, for example, about chainsaws, circular saws, scythes or baseball bats.

The yellow category includes non-functional metal and/or wood firearm replicas and soft-air pistols and rifles. These items must be recognizably unfit for shot.

This means that they must not have a trigger or have an irreversibly blocked run. Only after an examination of the inability to function and marking at the entrances to the event site is it allowed to be carried along.

However, we would like to point out the following more clearly than before and repeatedly: The carrying of sham weapons (Section 42a WaffG) is prohibited. What does that mean? Let us explain the considerations we have made and quote briefly from the event description:

“As every year, the FaRK’s programme is suitable for families and children. The FaRK deals with topics related to science fiction, steampunk, cosplay, fantasy, live action roleplay, movies, series, comics, manga, computer/video games and the post apocalyptic genre.
Thats how it creates a unique world for all fans of fantasy. In addition to shows, concerts and readings, dealers and exhibitors, the FaRK offers the opportunity to escape into a dream world and at the same time do something good.”

The carrying of realistic replicas of firearms by visitors is – also against the background of the current security situation – contrary to our existing security concept, which is coordinated with the licensing authorities. Weapon replicas will only be released this year if the proximity to a genre is visible in the sense of the FaRK idea. Objects must be modified in such a way that an aspect of oversubscription inherent in the fantasy becomes recognizable. So much for theory. Off to practice:

If I just paint my AK47 replica pink, I am not in. I change the object so much through attachments that the objective observer says: “Hey, this is a Gauss-Railgun”, then I have done everything right and get a release. This is a very extreme example, but it is still clear what we are talking about.

We are of course aware that there is always a grey area between black and white, which is difficult to represent in words and writing. This year, in the run-up to the event, we will train our helpers in such a way that a “uniform measure” can be applied when classifying objects.

The “Green” category includes all items which are not dangerous due to their design and which are used in LARP. These include imitations made out of foam, rubber, cardboard or soft plastic, LARP weapons (“Live Action Roleplay” – generally foam or latex replicas with stabilization core), weapons and rods made of a combination of wood, GRP, Worbla and/ or cardboard, plastic or other soft materials, rods which are clearly used for stabilization, arches and quivers (without arrows – unless they are LARP-compatible), performance enhancement as well as carnival and toy guns.

In addition, we would like to point out that exhibitors who accompany us throughout the entire event and make a decisive contribution to the atmosphere of the FaRK with their presentation, it is possible to carry out a preliminary examination of objects and, if necessary, to make individual arrangements. These individual permits are spatially limited to the respective exhibition areas.